Korea is sometimes well known for its gaming culture, as many competitive professional gamers live and work there! But other than the stereotypical computer games, did you know that many enjoy mobile games as well?

An action RPG made by Com2uS, where you join the fight against devils which threaten to take over the world, Hermes. The game intially offers you 1 out of 5 different characters, with different sets of play styles.

The characters differ from each other by their attack styles, varying from each other in terms of aggression to defensive capabilities and ranged magician or melee warrior.

The game also offers a support system, in which other characters can be placed in a team with you main character! They can be called to assist your main any time while in dungeons and gives a variety buffs! 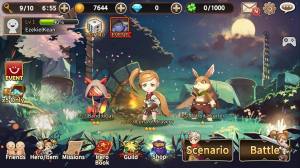 You are a mercenary looking for work in a quiet town, but deep within the forest, a mysterious witch has imprisoned goddesses and tainted the land! You form a group with others, and go on a crusade to save the goddesses and get rid of the evil witches!

Crusaders quest itself is relaxing and simple. Tap blocks to use your characters’ skills as they progress through the dungeon, chain blocks to deal more damage.

The designers and artist really complemented the 16bit art style, creating a game that is soothing, appealing and cute! The music really does make one reminisce about the past as the game uses 16 bit style music when doing dungeons.

This game is an excellent choice for the casual gamer.

This game was made by NHN Entertainment Corp.

If you enjoyed the story concept of League of Legends, this might just be your cup of tea. You are a magician who has entered a tournament, the winner is granted anything their heart desires. Summon monsters that battle for you in this turn based game and lead them to victory! This game was brought to you by Com2uS.

The game itself is your standard RPG, with a turn based mechanics. However you have more freedom and control over your monsters. Each summon has their own unique capabilities and can be further customised through the use of runes that you find along the way! You have your own land and space, and the game allows you to customise it as you please as well! 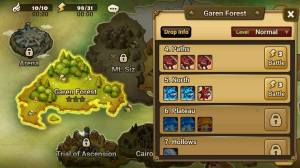 I hope you enjoyed this selection and stay tuned for the next post on So Cool Korea!